Walking through an infestation, volume trouble

Not hungry, can’t Intercept, Now what?

The strategy with crawling insects was two fold ,

But pantry moths didn’t seem to have a favorite food.  Many studies were conducted to power moth traps with dry goods ( pasta, corn starch, flour, bird food,  dog food etc).   You can try this at home:  Don’t set the lure in a moth trap, just place a piece of dog food… The trap won’t work.  Plodia didn’t care about food.

From the get go, an intercept strategy would be minimally effective.  Just look at flies, fly paper ribbon is foul scented, to attract a fly.   There is just too much surface area to consider.

Understanding a pantry moth in flight

The really bad news, pantry moths don’t eat anything once they reach the winged stage of life.   Most of the time, the adult moth seemed to be on random flight instead of a bee like, focused mission. It seemed like the most common attractants are light and each other.    The power to draw the interest of a pantry moth became a focus, and science was hard at work.

The power of Love

Ok, probably not love in the emotional (or Huey Lewis) sense.  It soon became apparent that the flying adult moths were looking for a insect bride.   The attractant was something between each other.  Scientists didn’t need to look far to find the concept whether in lightning bugs or lions.   An option to use a Lure to Power a Moth Trap moved to the forefront of research. Research revealed a one sided moth courtship, female moths produce a pheromone that draws male moths like… well a moth to a flame.  But male’s produced no pheromone Effective Moth Traps would be lure powered thus harnessing the male drive to pro-create.   And the rest is history, the female pantry moth pheromone was recreated as a small chip with 500X the scent of a female moth.

A pheromone, no matter how powerful, dissipates over time and for female moth scent, it was a 3 month window before the lure would be spent.  In the last century, consumerism didn’t focus on Reduce , Reuse or Recycle; so moth traps (although potentially half full) became throw away when the catch power of the lure was drained. Now brands like Able Catch moth traps, respect the environment by shedding wasteful packaging (REDUCE) and with the introduction of Affordable Recharge Lures traps can be recharged ( RECYCLE ) with a new lure powering the trap for an additional 3 months. 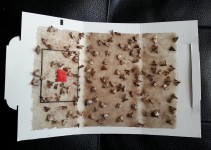 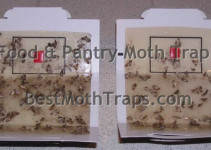